Let me say right off the bat that I’m not one of those food snobs who looks down on the idea of Taco Bell breakfast.  It seems that most of the commentary I’ve seen on the subject comes from a place of complete contempt for the concept and for the type of person that would even consider eating there.

This isn’t that sort of review.  I like fast food.  I especially like innovative and novelty fast foods, that cheaply and conveniently bring me taste sensations that I’ve never had before.  So I was excited for Taco Bell’s breakfast menu, and I really wanted it to be good.  But unfortunately, it just wasn’t.

This is the item that people were most intrigued about.  I feel like most people expected it to be either awesome or horrible, or possibly both at once.  But the reality is neither.  It’s just bland and tasteless.  Here’s a picture:

The biggest problem is that, despite it being called a waffle taco, there’s no waffle there.  A waffle is sweet, crispy on the outside, and fluffy in the middle.  Instead, the taco is on a vaguely waffle-shaped piece of soggy spongy flatbread with no flavor whatsoever.  The sausage is also very bland.  The eggs, cheese, and bacon are about what you would expect from fast food, but there are plenty of much better ways to eat fast food eggs/cheese/bacon.

If you’re really interested in the concept of combining sweet and savory breakfast foods, you’d be much better off with the McDonalds McGriddle.  Personally I’m not a fan of that, but at least the pancake buns taste like pancake and the sausage tastes like sausage.

This is basically a large breakfast burrito that’s shaped differently.  You already know what a breakfast burrito tastes like.  This is like that.  In terms of premium fast food breakfast burritos (or burrito-like items), it’s okay.  I prefer the Carl’s Jr. Big Country Burrito, which has chicken gravy in it, or the McDonalds McSkillet which has roasted vegetables.  But the A.M. Crunchwrap gives you what you expect, and if you order it you won’t be disappointed. 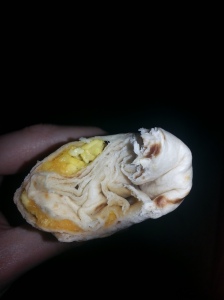 Notice how little actual stuff there is in that burrito, compared to how much tortilla there is.  So I definitely would not order this again.  You’re much better off with the McDonalds Sausage Burrito, which is cheaper and has more filling in it.

Holy crap these are good. They’re basically deep-fried cinnamon donut holes filled with delicious goo. I would say this is the best desserty item offered at *any* major fast-food chain. I feel sorry for all the parts of the country that haven’t been able to enjoy these for the last few years. (They aren’t quite as good as actual Cinnabons, but they’re also only 260 calories, compared to a Cinnabon which is… holy crap! 880 calories! Yeah, I knew there was a reason I rarely eat at Cinnabon despite it being delicious.)  Note that these are available all day – not just at breakfast.

Speaking as a fast food fan who normally likes this sort of thing, I would not return to Taco Bell for breakfast.  The only good item is the Cinnabon Delights, which are available all day.  If you’re hungry and no other fast food places are convenient, the A.M. Crunchwrap isn’t a bad choice.  But it isn’t worth a special trip.

(Let me know in the comments if there are any other weird fast food items you would like me to review.)

What makes movies great and how they can be better